Brig. Gen. Robert P. Hughes told the US Congress that Filipinos who wanted freedom had "no more idea of its meaning than a shepherd dog." An early statement of American policy declared that only through American occupation was the idea of a free, self-governing and united Filipino commonwealth at all conceivable. A tattered flag of the First Philippine Republic, one of  many used during the struggle for independence.  The flag believed by heirs of Emilio Aguinaldo to be that unfurled by the general in Kawit, Cavite, in 1898 is encased in glass at the Aguinaldo Museum on Happy Glen Loop in Baguio City; however, the National Historical Institute has yet to authenticate this flag despite years of probing.  In his letter to Capt. Emmanuel Baja dated June 11, 1925, Aguinaldo mentioned that in their Northward retreat during the Filipino-American War, the original flag was lost somewhere in Tayug, Pangasinan Province; the Americans captured the town on Nov. 11, 1899. The Aguinaldo Mansion as it looked in 1914 The Aguinaldo mansion in Kawit, Cavite, site of the historic Proclamation of Philippine Independence on June 12, 1898 was declared a national shrine in June 1964. General Emilio Aguinaldo died on Feb. 6, 1964. The balcony did not exist in the 19th century; likewise, although he unfurled it, it wasn't Aguinaldo who waved the Philippine flag from the central window; Ambrosio Rianzares Bautista did.

On , Emilio Aguinaldo declared the independence of the Filipinos and the birth of the Philippine Republic under the protection of the mighty and humane North American Union..

This momentous event took place in Cavite el Viejo ("Old Cavite", now Kawit), . Admiral Dewey had been invited but did not attend. The Filipino national flag was officially unfurled for the first time at The same flag was actually unfurled, albeit unofficially, on at the Teatro  Caviteño in Cavite Nuevo---now ---right after the battle of Alapan, Imus, He was born on , in Biñan, Laguna Province. He graduated from the  with a  Bachelor of Laws degree. He was known as Don Bosyong to peasants and laborers who availed themselves of his free legal services.

When the Philippine-American War ended, Bautista was appointed as judge of the Court of First Instance of Pangasinan Province.  He died of a fatal fall from a horse-drawn carriage on , at the age of 73. 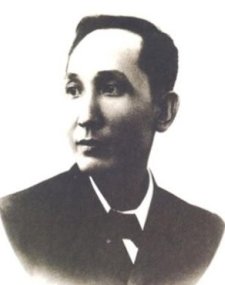 The June 12 proclamation was later modified by another proclamation done at Malolos, Bulacan, upon the insistence of Apolinario Mabini, chief adviser for General Aguinaldo, who objected to the original proclamation, which essentially placed the Philippines under the protection of the United States.

Apolinario Mabini (LEFT), also known as the "Sublime Paralytic", was a lawyer, statesman, political philosopher, and teacher who served in the Aguinaldo cabinet as President of the Council of Secretaries (Prime Minister) and as Secretary of Foreign Affairs. He wrote most of Aguinaldo's decrees to the Filipino people. An important document he produced was the "Programa Constitucional de la Republica Filipina," a proposed constitution for the Philippine Republic. An introduction to the draft of this constitution was the "El Verdadero Decalogo" written to arouse the patriotic spirit of the Filipinos.

Early in 1896, he contracted an illness that led to the paralysis of his lower limbs.  He was a member of Jose Rizal's La Liga Filipina and worked secretly for the introduction of reforms in the administration of government.

When the revolution broke out on Aug. 30, 1896, the Spanish authorities arrested him. His physical infirmity, however, made the Spaniards believe that they had made a mistake. On July 5, 1897 Mabini was released from prison and sent to the San Juan de Dios Hospital.

In June 1898, while vacationing in Los Baños, Laguna Province, Aguinaldo sent for him. He also headed the revolutionary congress and Aguinaldo's cabinet until he was replaced by Pedro Paterno on May 7, 1899. Marcella Agoncillo and family in Hong Kong. They rented a house at 535 Morrison Hill Road, which became the sanctuary and meeting place of the other Filipino revolutionary exiles.

The Philippine flag was sewn in  by Marcela Mariño Agoncillo; she was assisted by her 7-year-old daughter, Lorenza, and Delfina Rizal Herbosa Natividad. The generals of the eight provinces which revolted against Spain had replicas and copies made of the original flag. Marcela Mariño (RIGHT) was born in Taal, Batangas Province on June 24, 1860.  Tall and stately,  she was reputedly the prettiest woman in Batangas in her younger years. She finished her education in the Dominican convent of the Colegio de in the walled district of Intramuros, Manila. She learned Spanish, music, the feminine crafts and social graces. She was also a noted singer and occasionally appeared in zarzuelas in Batangas. [zarzuelas are plays that alternate between spoken and sung scenes].

She married Felipe Agoncillo, a Filipino lawyer who became the leading diplomat of the First Philippine Republic. They had five children, namely:  Lorenza, Gregoria, Eugenia, Marcela, Adela and Maria.

On , Marcela Agoncillo passed away quietly at the age of 86.

The Philippine National Anthem, then known as "Marcha Nacional Filipina", was played by the band of San Francisco de Malabon during the declaration of independence. It was composed by Professor Julian Felipe (RIGHT) but it had no lyrics yet. The composition had similarities with the Spanish "Himno Nacional Español." Felipe admitted that he purposely put into his composition some melodic reminiscences of the Spanish National Anthem "in order to preserve the memory of Spain."

Felipe was born in Cavite Nuevo (now Cavite City) on Jan. 28, 1861. A dedicated music teacher and composer, he was appointed by Emilio Aguinaldo as Director of the National Band of the First Philippine Republic.

His composition was adopted as the Philippine national anthem on .

He died in Sampaloc, Manila on . To suit the music of  "Marcha Nacional Filipina",   Professor Jose Isaac Palma wrote a poem in Spanish  entitled, "Filipinas" which was published for the first time in the first anniversary issue of the revolutionary newspaper "La Independencia" on . It became the lyrics of the national hymn.

Palma  was born in Tondo, Manila on June 3, 1876. He was educated at the Ateneo Municipal de Manila. He joined the Katipunan in 1896 as an ordinary soldier but later General Antonio Luna who put up "La Independencia",  which became the official newspaper of the Republic, took him in to edit the Tagalog section.

He wrote "Filipinas" in the house of Doña Romana G. vda de Favis at sitio Estacion (now Barangay Poblacion West), Bautista, Pangasinan Province (Bautista was the old  barrio  Nibaliw of Bayambang; on June 24, 1900, Nibaliw was renamed "Bautista", in honor of San Juan de Bautista or John the Baptist, and upgraded into a separate municipality). A few members of the "La Independencia" staff (ABOVE) were the first to sing the words of this poem to the tune of the "Marcha." Among them were Cecilio Apostol, another literary genius during this time; Jose Palma's brilliant brother, Rafael, later to become the president of the University of the Philippines; Fernando Ma. Guerrero who became the editor of "La Opinion" and "El Renacimiento", Epifanio delos Santos, and Rosa Sevilla de Alvero (RIGHT), a journalist,  social worker, educator and women's suffrage advocate.

The first translation into English of Palma's poem was written in the 1920s by Paz Marquez Benitez of the University of the Philippines. The most popular translation, called the "Philippine Hymn", was written by Senator Camilo Osias and an American, Mary A. Lane. The "Philippine Hymn" was legalized by an act of the Philippine Congress on Sept. 5, 1938. Filipino translations started appearing during the 1940s, the most popular being O Sintang Lupa ("O Beloved Land") by  Julian Cruz Balmaceda, Ildefonso Santos and Francisco Caballo. O Sintang Lupa was approved as the national anthem in 1948. On May 26, 1956, during the term of President Ramon Magsaysay, the Tagalog words were revised. Minor revisions were made in 1966, and it is this final version which is in use today. The Filipino national flag was hoisted for the first time by Emilio Aguinaldo on May 28, 1898 at the Teatro Caviteño. The unfurling was witnessed by about 270 captured Spanish marines and a large broup of officers and men of the U.S. Asiatic Squadron.

Filipina mestiza poses with a rifle

Filipino women and girls in Bacoor, Cavite Province. Photo was taken in 1898. 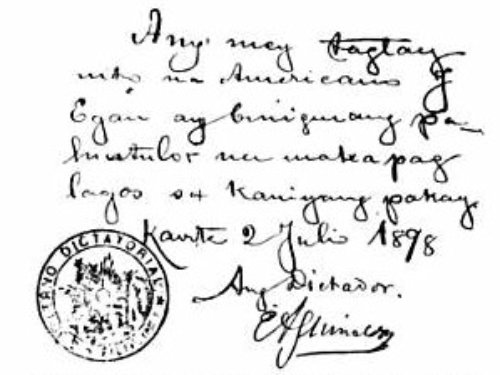